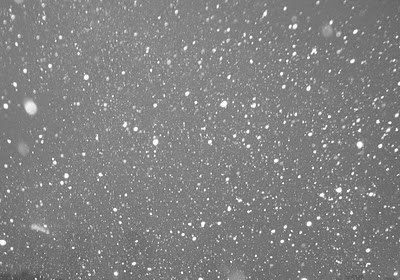 As I write this, New York City is in the early hours of a blizzard. The sun has just set and the snowflakes are creating temporary constellations in the sky. The image above is what the flashbulb revealed when I tried to take a photo. The forecasters say we could get 10 to 15 inches, which would make this a substantial but not paralyzing storm. Then again, wetness, wind and the vagaries of nature have the power change every detail. We'll just have to see what's out there in the morning.

Strange sights tend to pop up before one's eyes in a New York City blizzard. I've certainly seen my share of them. I wish I could show you photos, but I'll just have to describe a few for you. At least I've found some photos other people have taken during New York blizzards in the past.


One night in 1978 a blizzard blew through the Northeast and left 18 inches of fresh snow on top of snow already on the ground in New York City. The next morning I walked to the subway, which was running, and came upon a Cadillac so new it probably still had its showroom smell when it was abandoned in a snowdrift; the driver's door was left wide open and snow had drifted into the car and onto the seat. In Manhattan, people were cross-country skiing down the middle of the streets while those of us on the sidewalk walked uptown backwards because of the lashing winds.


The blizzard most New Yorkers remember best is the one that dropped over 20 inches of snow on the city in February 1996. Two sights I will never forget:

Don't you love this photo? It was taken in midtown Manhattan by an unnamed photographer working for the U.S. National Oceanographic and Atmospheric Administration (NOAA) "in the course of an employee's official duties." That must have been some job description.

One last photo and a poem by Wallace Stevens.

One must have a mind of winter
To regard the frost and the boughs
Of the pine-trees crusted with snow;

And have been cold a long time
To behold the junipers shagged with ice,
The spruces rough in the distant glitter

For the listener, who listens in the snow,
And, nothing himself, beholds
Nothing that is not there and the nothing that is.


Want to see more New York City snow? Have a look at Life magazine's photos of the storm we had last February.
9 comments:
Email ThisBlogThis!Share to TwitterShare to FacebookShare to Pinterest

For Those Who Are Not So Merry

Christmas has a way of getting complicated as we grow older. The colorful lights and beaming faces of children increasingly compete with memories of people and times that once were and are no more. Forced cheerfulness wears on a person. Today's blog is a soundtrack for all the people who want to sneak off into a corner and grieve a little while. (Note: I have not included Elvis Presley's "Blue Christmas" because, frankly, it's a pretty bouncy tune.)

For me, Joni Mitchell's "River" says everything you need to know about holiday loneliness and regrets.


When I was young, "O Holy Night" always had a special meaning in our house. Whenever the choir came to the line "Fall on your knees," my mother would cry. We lost our mother 24 years ago, and now my sisters and I cry when we hear it. This version by the King's Singers is not the one my mother cried to, but I think she would have liked it.


"Have Yourself a Merry Little Christmas" is a song that pretends to be happy. If you listen to this lovely version by Frank Sinatra, you almost miss the underlying sadness. The original version by Judy Garland makes it obvious. Go here for the video.


Bonus: Go here to listen to Tony Bennett's great version of "Have Yourself a Merry Little Christmas" over scenes of Cary Grant and Loretta Young in The Bishop's Wife.

One last tune, and it's not about Christmas. It's "Kind of Blue" — the Miles Davis classic performed here with John Coltrane. It's the music I write to, so while it is a bit blue, to me it ultimately represents creation and life.

Have yourself as merry a Christmas as you can muster.
8 comments:
Email ThisBlogThis!Share to TwitterShare to FacebookShare to Pinterest

The Beginning of the End (of My View)

It's almost black and white out today. The clouds are so low and the rain is so steady, the sun's rays are muted and wan. The weather and my pre-coffee grogginess largely explain why, when I looked out my kitchen window this morning, at first I didn't understand what I was seeing. 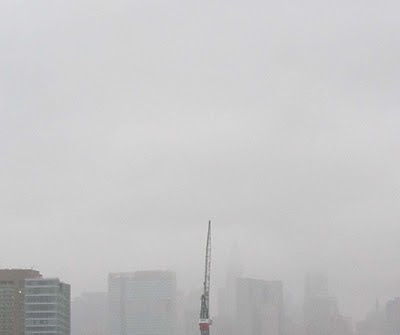 But then I knew: It's the crane that will erect the 46-story building that will obliterate the skyline view that drew me to this apartment almost 30 years ago. I won't pretend I didn't know it was coming. I've watched the preparations for years — soil decontamination started when George W. Bush was still in the White House under enormous white tents that bore the AIG logo. But when the recession deepened and AIG collapsed, the tents came down and everything stopped. Although I knew it was false, I indulged the hope that the real estate barons would write off this monstrously out-of-scale building as a bad idea. 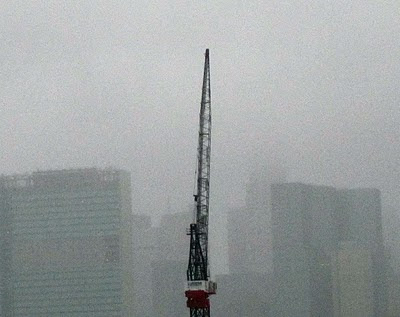 The vaguely greenish rectangle to the left of the crane is the UN tower. Immediately to the right, with its fantastic crown hidden in the mist, is the Chrysler building. Further to the left — out of the frame and obscured by clouds — are the top few floors and mast of the Empire State building; about five years ago the rest of it disappeared behind another new building only half the size of the one this crane will erect.

The lights and towers of the New York skyline have cheered me through happy times and comforted me at some of lowest moments of my life. On so many July 4ths, we watched the fireworks through that window. When my mother died, I stood at the window imagining her young and laughing, out on the town with my dad. Since 9/12/2001, I have said goodnight to the New York skyline every evening — a small ritual, but one that has become important to me. So I've decided to chart the progress of the new building, as well as my grief for my disappearing view, in occasional posts here. 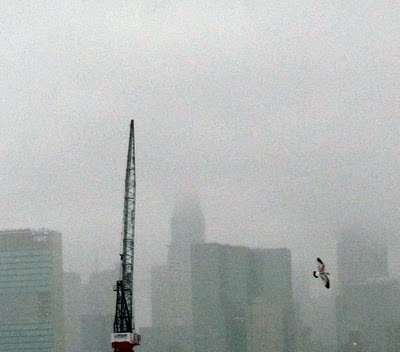 I wonder what the terns will think.
11 comments:
Email ThisBlogThis!Share to TwitterShare to FacebookShare to Pinterest

It's coming on Christmas
They're cutting down trees
They're putting up reindeer
And singing songs of joy and peace
~ Joni Mitchell, "River"

This hasn't been an easy year for the New York Public Library; more than once, the city's budget-balancers threatened draconian cuts — the worst of which were avoided thanks to great upwellings of outrage from the citizenry. Our library needs all the friends it can get; so on Sunday, when it hosted its annual open house for friends and supporters at the main branch on 42nd Street, it was good to see the place was mobbed.

We waited first in the cold in a line that snaked around and finally inside, followed by more lines to climb stairs, travel down hallways and eventually wend our way to the main entrance. At last we stood in a room filled with light and cheer and the music of the Brooklyn Waterfront Dixieland Band. 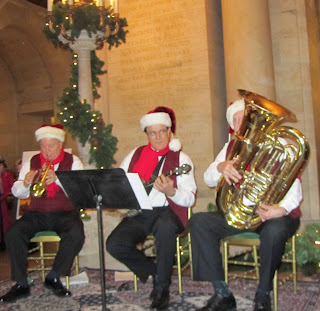 When my eyes finally focused, I realized they were resting on Vanity Fair Editor Graydon Carter, a strikingly tall presence with intellectual-length hair and beautifully tailored clothing. He was just one of many fancy-dress characters — some of them a good bit taller.


The party wasn't all photo-ops. There was food and drink and entertainment for all: music from the Rock & Klezmer Holiday Consortium and the Ari Ambrose trio; enchantments for children including the Galapagos Puppet Company, the Duncan and Grins Circus, origami lessons, face-painting and storytelling; and exhibitions of some of the library's wonders, including its outstanding photography collection and the hand-marked copy of A Christmas Carol that Charles Dickens used for his public readings. You could almost hear him say, "There is nothing in the world so irresistibly contagious as laughter and good-humour."

A man is at his finest towards the finish of the year;
He is almost what he should be when the Christmas season's here;
Then he's thinking more of others than he's thought the months before,
And the laughter of his children is a joy worth toiling for.
He is less a selfish creature than at any other time;
When the Christmas spirit rules him he comes close to the sublime...
~ Edgar Guest, "At Christmas"
4 comments:
Email ThisBlogThis!Share to TwitterShare to FacebookShare to Pinterest
Newer Posts Older Posts Home
Subscribe to: Posts (Atom)