Whatever it is, they're against it

"Censorship reflects a society's lack of confidence in itself. It is a hallmark of an authoritarian regime."
~ Potter Stewart 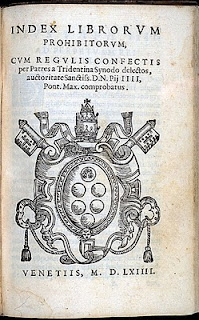 After I wrote my previous post about Banned Books Week, I got an email from Dave Rock, the husband of one of my cousins, who reminded me about the Index Librorum Prohibitorum — the Catholic Church's former list of prohibited books. Published from 1559 until it was abolished in 1966, the list included works by some of history's best known scientists, novelists and other authors — Galileo Galilei, Johannes Kepler, John Milton, David Hume, René Descartes and Victor Hugo among them.

When I was very young, the Index was still taken seriously in certain Roman Catholic circles, including my elementary school. Thinking about it fetched up a memory from those days about the time a banned film came to my home town. It was 1958 and the movie was God's Little Acre, starring Robert Ryan, Aldo Ray and Tina Louise. The film was based on Erskine Caldwell's 1933 novel of the same name, for which Caldwell was arrested, tried for obscenity and ultimately exonerated. Its presence at the local movie theater caused outrage, protests and, if I remember correctly, a short-lived boycott.

It all brings to mind the immortal words of Professor Quincy Adams Wagstaff in the 1932 movie Horse Feathers.


“The fact is that censorship always defeats its own purpose, for it creates, in the end, the kind of society that is incapable of exercising real discretion.”
~ Henry Steele Commager
No comments:
Email ThisBlogThis!Share to TwitterShare to FacebookShare to Pinterest

It's Banned Books Week: Open a book, open a mind

"I am opposed to any form of tyranny over the mind of man."
~ Thomas Jefferson

Banned Books Week 2011 starts today, September 24. While some of us champion freedom, the intolerant are always on the hunt for new ways to curtail it, never recognizing the absurdity of their efforts. As George Bernard Shaw pointed out, “Censorship ends in logical completeness when nobody is allowed to read any books except the books that nobody reads.”

One of the sponsors of Banned Books Week, the American Library Association (ALA), has a calendar of events including a virtual read-out on YouTube. The ALA's site also includes lists and statistics about the most frequently challenged books and authors. One mind-boggling example: Aldous Huxley's Brave New World — published in 1932 — is one of the ten most frequently challenged books of 2010.

While the desire to censor may not change, circumstances do. Today's prospective book banners, book burners, political demagogues, religious fanatics and simple megalomaniacs will find that, thanks to digital communications, thoughts are harder than ever to control.

“All books can be indecent books, though recent books are bolder.
For filth, I'm glad to say, is in the mind of the beholder.
When correctly viewed, everything is lewd.
I could tell you things about Peter Pan,
And the Wizard of OZ, there's a dirty old man!”
~ Tom Lehrer

An eye for the absurd

"Everything we see hides another thing. We always want to see what is hidden by what we see."
~ Rene Magritte

“La Carte d’Après Nature,” a show at the Matthew Marks Gallery on West 22nd Street (New York City) through October 8th, takes its name from a journal created by the great Belgian Surrealist Rene Magritte.  The New York Times says of the journal: "It took the form of postcards mailed to fellow artists and writers, and included drawings, snippets of poetry and short stories..." Various notes and postcards from the journal are in a display case in an out-of-the-way corner of the gallery entrance area. Two Magritte paintings, "In the Airy Glades" and "The Universe Unmasked," are also in the show.
My old friend Dawn Willis and I were in the neighborhood to see the Gagosian's new Andy Warhol show (more below). We're both huge fans of Magritte, but the work that stood out for both of us was made by the late Italian photographer Luigi Ghirri. His photography dominates the show — dozens of exquisite images, most of them quite small, most infused with a deadpan absurdist spirit. I'd never heard of him before, but now I can't stop thinking about his work and want to know more about him.
Ghirri often photographed people in front of artificial landscapes. Sometimes the effect was subtle, as in this photo, which is titled "Lucerna." 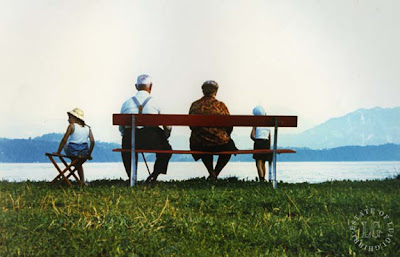 And sometimes the effect is not so subtle at all. Behold "Salzberg." 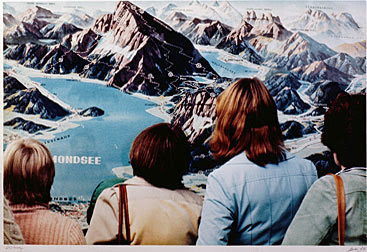 He also photographed landscapes with artificial features, such as this palm tree. 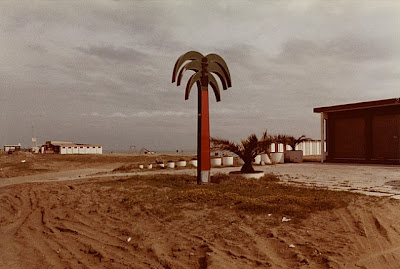 One of my favorite photos is this one, taken through the window of a hat shop in Parma. 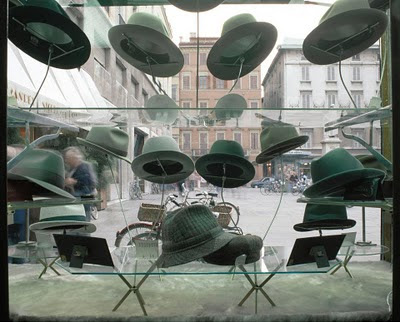 The Internet is disappointingly unhelpful on the subject of Ghirri. I learned from Wikipedia that he was born in Scandiano in 1943 and died in 1992. The program notes for a 2001 exhibition at the Julie Saul Gallery add this: "Ghirri created visually profound images about the nature of representation and seeing. Although he freely acknowledged the influence of American photographers Lee Friedlander, Walker Evans and William Eggleston, as well as Atget, his work possesses a witty and worldly sensibility that is purely his own."

At the Gagosian's West 21st Street gallery, Andy Warhol's silkscreens of Liz Taylor, large and small, are on every wall. Dawn is a major fan and was excited that so many images she hadn't seen before were gathered in one place. A large silver canvas with multiple images of Liz in her National Velvet days was my personal favorite.
Continuing the Warhol theme and rounding out the day's absurdities, we stopped by the chrome-covered Andy Warhol "monument" at Union Square. With its super-shiny finish, it looks like a sports trophy or hood ornament. Andy would probably have loved it. 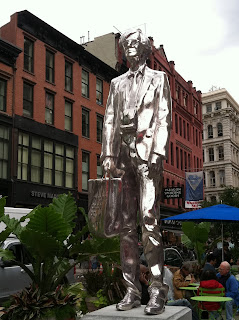 "All thought must, directly or indirectly, by way of certain characters, relate ultimately to intuitions, and therefore, with us, to sensibility, because in no other way can an object be given to us."
~ Immanuel Kant
No comments:
Email ThisBlogThis!Share to TwitterShare to FacebookShare to Pinterest 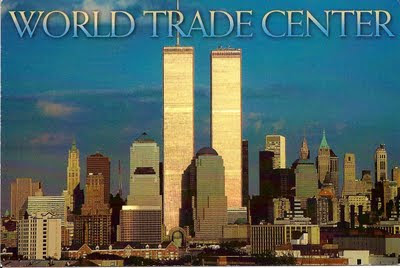 I found this postcard in a shop at Jones Beach in the spring of 2002. I take it out and look at it every once in a while. It reminds me to be vigilant, but it has never made me want revenge. Each person is different and all of our feelings are valid, but I simply don't know many people in New York City who wanted revenge. With that in mind, some thoughts for this day...


"He that studieth revenge keepeth his own wounds green, which otherwise would heal and do well." ~ John Milton

"Revenge...is like a rolling stone, which, when a man hath forced up a hill, will return upon him with a greater violence, and break those bones whose sinews gave it motion." ~ Albert Schweitzer

"An eye for an eye would make the whole world blind." ~ Mohandas Ghandi

In 2009 CBS Sunday Morning did an interesting report about the varied ways people respond to those who inflict suffering on them. You can see it here.