On average, odd years have been the best for me.
I'm at a point where everyone I meet looks like a version
of someone I already know.
~ from "Fragments for the End of the Year" by Jennifer K. Sweeney

Today I spent a little time with the Library of Congress's Prints & Photographs online catalog looking at New Year's celebrations of the past. I was fascinated by the year 1909, when everybody seemed to be down in the dumps for no particular reason.

Not even funny hats and feathers produced smiles on this crowd of sourpusses. 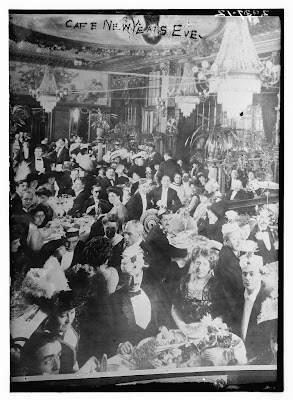 The magazine Puck ushered in 1910 with an illustration called "The Safety-Valve". 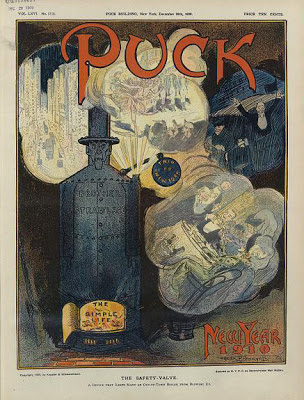 Proving that some things never change, I found an illustration titled "New Year's Eve at the Hotel Prosperity" – where all the tables are reserved for special interest groups. 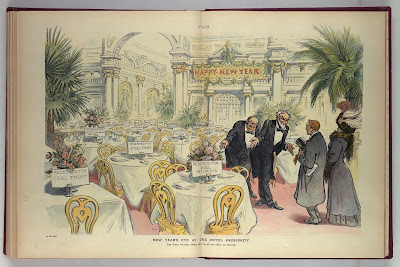 All of this left me wondering about 1909 – what was going on that year? According to the Internet, it was fairly quiet. On March 4, William Howard Taft succeeded Theodore Roosevelt, becoming the 27th U.S. President; the NAACP was founded under the leadership of W.E.B. Du Bois; unemployment was just 5.1%; and Paul Ehrlich discovered a cure for syphilis. From this distance, it doesn't look too bad. Then again, new years are always overstuffed with portent.

To see some cheerful images of year-end celebrations where at least some people appear to be having fun, visit Flavorpill's "Amusing Vintage Photographs from New Year's Eves Past".

All within is warm,
Here without it's very cold,
Now the year is grown so old
And the dead leaves swarm.

In your heart is light,
Here without it's very dark,
When shall I hear the lark
When see aright?

Oh, for a moment's space!
Draw the clinging curtains wide
Whilst I wait and yearn outside
Let the light fall on my face.

"In Tenebris" by Ford Madox Ford