"Life is what happens to you when you're busy making other plans."
~ Allen Saunders

Saturday, August 17th was the final day of this year's Summer Streets, a program the New York City Department of Transportation (DOT) has run for the past few years. Over three weekends each August, the DOT closes certain streets to cars and lets pedestrians and bike riders roam free.

For one of the early Summer Streets, the DOT set up giant dumpsters filled with water in a few places, allowing people to put a literal spin on dumpster-diving. This year the program extended from the foot of the Brooklyn Bridge at Foley Square and up Lafayette Street and Park Avenue to 72nd street and included everything from art to a zip line and a rock climbing wall.

One of the top attractions of 2013 was the Voice Tunnel, an installation by Mexican-Canadian artist Rafael Lozano-Hemmer. The Voice Tunnel was installed in the underground roadway that allows cars to travel beneath Park Avenue between 32nd and 41st Streets. I'd been meaning to see it, and today was the last chance.

I made my way down to the entrance 32nd Street. At first I tried walking in the street, but found dodging the teeming masses of bike riders too aggravating and ended up on the sidewalk. More and more people are taking to bikes in this city. In theory, it's great; in practice, mobs of rude boneheads on bikes are making walking less and less fun.

When I got to the tunnel entrance I discovered that everybody else in the city was already there. The line was so long that they closed the entrance more than two hours early to allow the already assembled crowd to pass through by 1:00 p.m., when the street would reopen to cars. Here is a short video of what I did not get to see in the Voice Tunnel.

On to plan B, devised when I walked out onto the street and realized the elevated roadway that runs around Grand Central Terminal was also closed to cars. Until today, I'd only ever been through there in a cab. Now I had the chance to find out how things look from the pedestrian vantage point.

The first sight to see was Cornelius Vanderbilt, forever memorialized in his extravagant overcoat. Vanderbilt founded the New York Central Railroad; built Grand Central Depot, the predecessor to Grand Central Terminal; and was the patriarch of the family that owned the property Grand Central stands on. 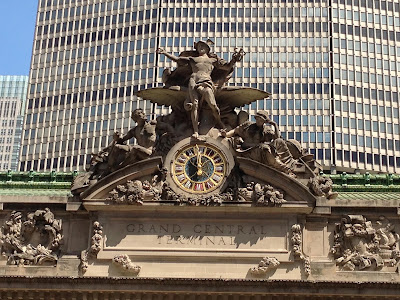 I also had a closer-than-normal view of the sculpture titled "The Glory of Commerce" by French sculptor Jules-Felix Coutan. That's Hercules on the left, Minerva on the right and Mercury in the middle. Learn more about it in this post on the Untapped Cities website. 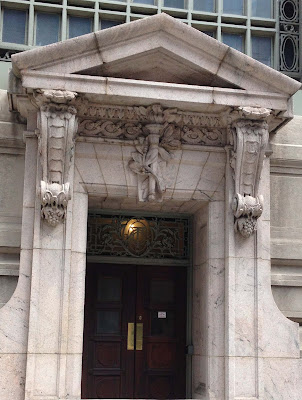 This is one of four employee entrances that stand, two per side, on the elevated roadway.  A little note is posted on all four doors saying employee I.D. is required. 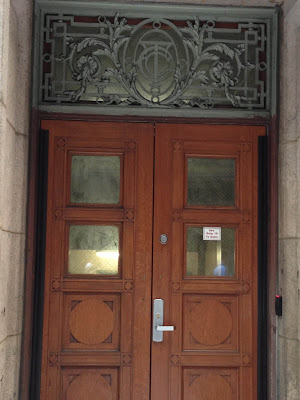 This is another employee door – better lit and possibly cleaned up a bit, but with the same note. 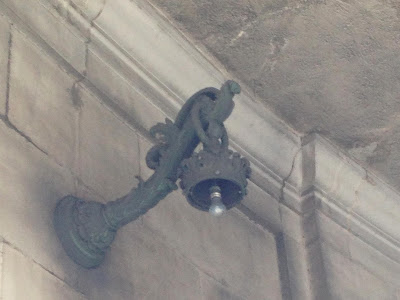 Old, ornate lanterns line the part of the roadway that runs under the Helmsley building. 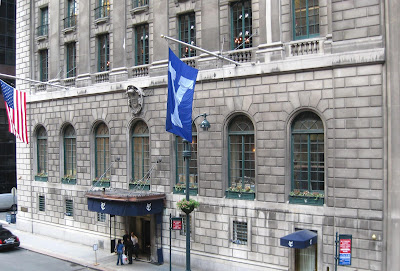 This is the Yale Club - not my photo, one I found on Wikimedia Commons. The club is across Vanderbilt Avenue from Grand Central, and as I looked at it I thought about Revolutionary War hero Nathan Hale. There's a plaque on the corner of the club saying Nathan Hale was hung here. But that's arguable — read this post in Ephemeral New York for an alternative claim. 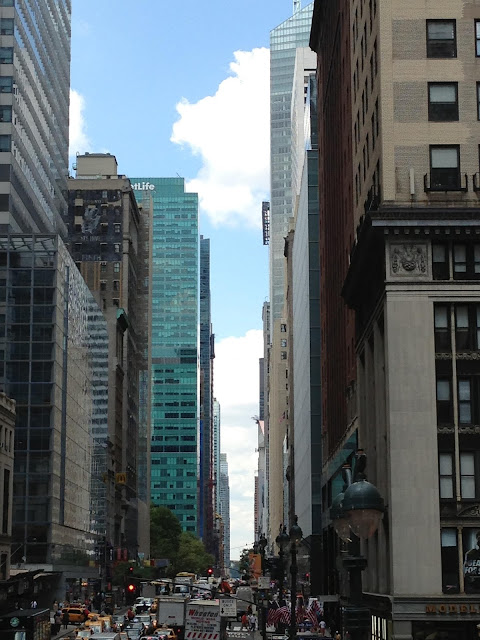 It was a beautiful day, as this view looking West on 42nd Street makes clear. 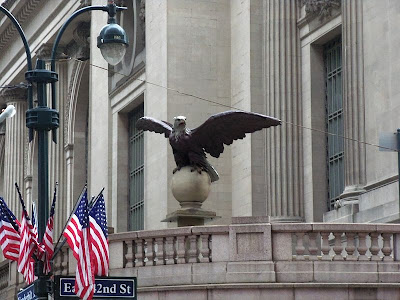 The "Vanderbilt eagle" is a familiar site to anyone who walks along East 42nd Street. (This is another Wikimedia Commons photo, by the way.) What I discovered today is, the eagle's wings are supported by a beam and bolts. 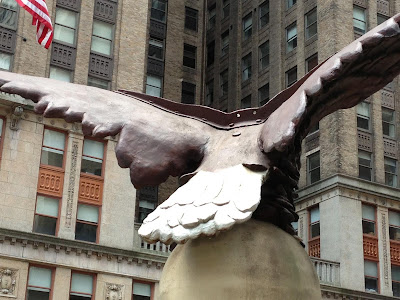 And that is how I spent my Saturday morning. What did you do?

"The life of every man is a diary in which he means to write one story, and writes another..."
J. M. Barrie


4 comments:
Email ThisBlogThis!Share to TwitterShare to FacebookShare to Pinterest

Migraine and the Last of Migraine

It was a bright, brisk day in the autumn of 2006. My husband, Robert, was outside fiddling with our car. Because this is New York City, our car was parked at the curb across from our apartment building and he was alternating between the sidewalk and the street.

At some point he realized that a cat, a blond tabby with big green eyes, was sitting on the sidewalk watching him. After a while he locked up the car and started across the street to our building. The cat followed along. Robert opened the door, looked at the cat and said "Are you coming?" and the cat trotted in. He then followed Robert up three flights of stairs to our door. And came in.

This was our introduction to the cat we came to call Migraine*.

It was clear that Migraine loved people, but it turned out he didn't like cats. This was unfortunate since we already had two cats – best friends Bogie, a big goofy Tuxedo, and Little Harry, a sweet and beautiful Chartreux. We decided we'd try to find blondie's owner and, if we couldn't, we'd find him a good home. We asked all over the neighborhood, checked with all the veterinarians and shelters, looked for signs about a missing cat. Nothing. But we didn't worry. After all, who wouldn't want this loving and handsome young lad? But first – to our veterinarian, Dr. F.

That's when things got complicated. Migraine was not a young cat after all. Dr. F. was sure he was at least 11 or 12. He also had a "galloping" heartbeat, which Dr. F. correctly guessed (and confirmed via blood work) was related to an overactive thyroid. We tried out medications and eventually found a dosage that slowed his heartbeat without making him logy.

A handsome, friendly young cat is one thing. A handsome, friendly middle-aged cat with a bad heart and a thyroid condition was another. It looked like Migraine was staying with us. We had a talk with our three felines and told them they'd just all have to learn to get along.

Gradually, over the next several years they did at least learn to tolerate one another. While they never became great friends, Migraine stopped hissing at Bo and Harry and they stopped running out of the room when he came in. Mostly, Migraine liked to sit beside me on the sofa. He especially loved it when Robert would talk to him and scratch him behind the ears.

Over the years his health declined. By 2012 his thyroid meds were no longer controlling his galloping heartbeat and his kidneys were starting to go. His eyesight was so poor that I had to remove the top from the litter box so he could find the way in.

2013 was an especially bad year for Migraine. He periodically stopped eating. Each time it happened, I'd find some new, more interesting food for him to try. For the past six weeks or so, I gave him pieces of chopped up broiled chicken in every meal. That worked pretty well for a while. But this week nothing worked. He simply stopped eating. After a day he wobbled around or lay on the floor panting. He spent Thursday panting and staring at the side of the refrigerator, or the radiator, or a blank wall. He was getting emaciated. He was confused. He would drink water and pee while he stood there, seemingly unaware.

I thought – hoped – he would die gently in his sleep. But he didn't, so we knew it was time to intervene. We carried him to the veterinarian's office down the block. We took this final picture of our poor sad boy. 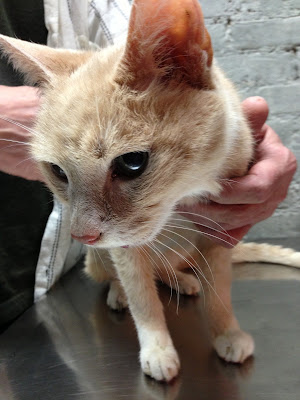 It was quick and merciful. We stayed in the room talking to him and petting him and crying throughout it all. No regrets, just tears.


"Our perfect companions never have fewer than four feet."
~ Colette

*About the name: We tried out several names for Migraine. This one stuck because he often walked around squinting the way I do when I have a migraine, and because his aggression toward the other cats was enough to give anyone a headache.