Happy New Year, everyone! I hope you enjoy it, wherever you choose to spend it.

My gifts to you this evening are a poem by W. S. Merwin and some vintage cards from the New York Public Library's digital archive.

To the New Year
By W. S. Merwin 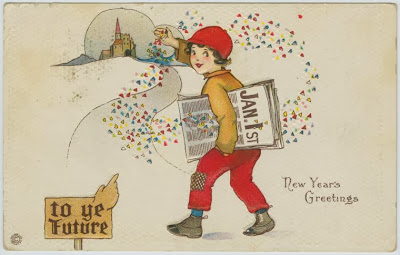 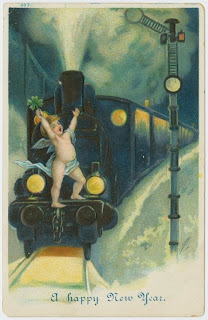 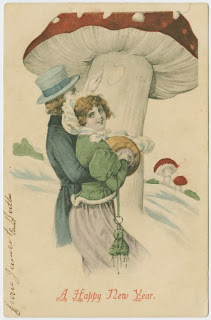 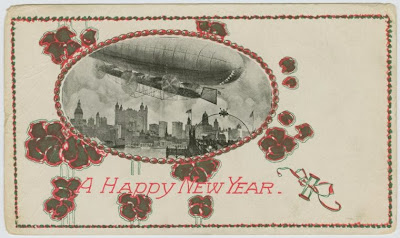 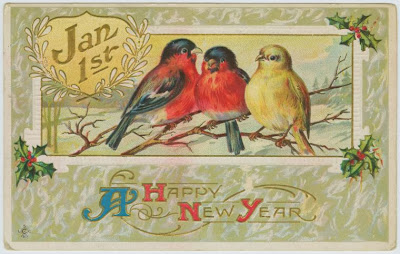 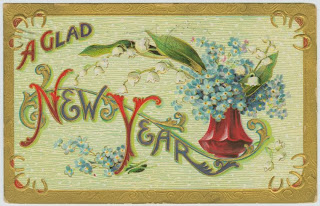 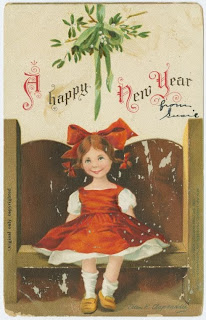 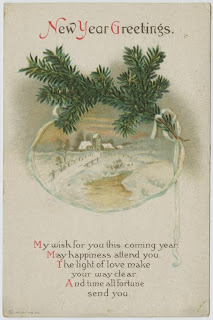 “Christmas is doing a little something extra for someone.”
― Charles M. Schulz 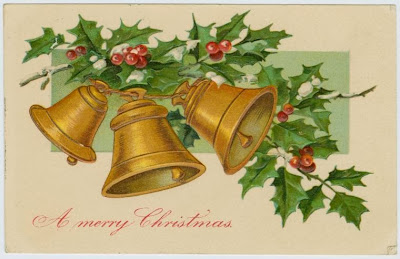 On Christmas Eve I spent some time browsing through the New York Public Library's extensive digital archive of vintage holiday cards. Although I'm not a believer, I have many great memories of childhood Christmases. What I learned: In the early 1900s, bells and holly were common themes and the red and green "Christmas colors" were not yet set in stone. Cards came in blues, yellows, pinks — every imaginable color, really.

While you look at a few cards I liked, listen to Cat Power's version of my favorite Christmas song. It's about hope in a time of uncertainty, and the older I get the more I understand that this is our constant state.

Now, to the cards. Here's one I think of as the Rocking Horse Loser. Did I mention that many of the children depicted on old cards looked peculiar? 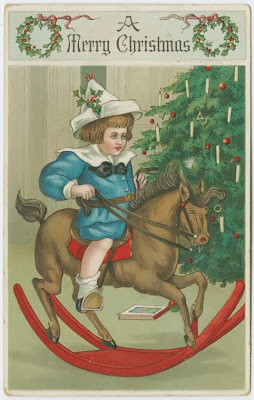 Here is a tinted photographic card. It's a bit like the family photo cards people send out these days...but off in an entertainingly wacky way. 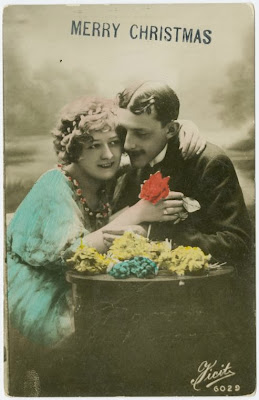 This is my favorite of the cards I found (admittedly, there are over 1,500 more that I never got to). I love the way Santa, the children and the dog are piled into the little bedecked roadster — steering wheel on the right — and the little boy in what could be a bellhop's uniform is waving. The sender addressed it on Christmas Eve, 1906, but I can't quite make out the signature. 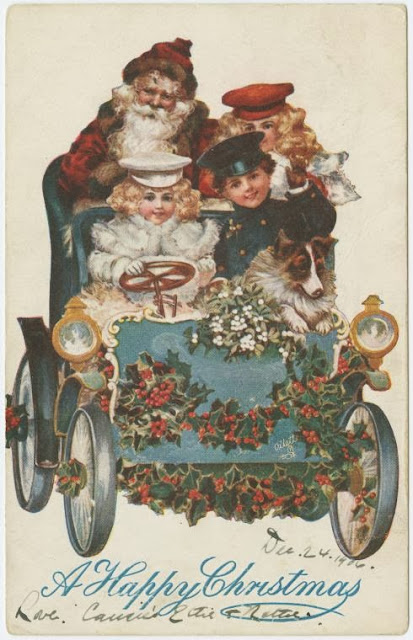 I'll leave you with the exquisite, haunting final paragraph of James Joyce's "The Dead," which begins at a holiday party and ends in eternity.

"A few light taps upon the pane made him turn to the window. It had begun to snow again. He watched sleepily the flakes, silver and dark, falling obliquely against the lamplight. The time had come for him to set out on his journey westward. Yes, the newspapers were right: snow was general all over Ireland. It was falling on every part of the dark central plain, on the treeless hills, falling softly upon the Bog of Allen and, farther westward, softly falling into the dark mutinous Shannon waves. It was falling, too, upon every part of the lonely churchyard on the hill where Michael Furey lay buried. It lay thickly drifted on the crooked crosses and headstones, on the spears of the little gate, on the barren thorns. His soul swooned slowly as he heard the snow falling faintly through the universe and faintly falling, like the descent of their last end, upon all the living and the dead."

"Delicious autumn! My very soul is wedded to it, and if I were a bird I would fly about the earth seeking the successive autumns."
~ George Eliot

As I write this, snow is falling in New York City. Autumn's colors, which came late, are now gone. But they were glorious while they lasted.

This year, in addition to posting leaves that I found, I asked friends near and far to contribute their own favorites. As a result, this post offers a bountiful array of nature's beauty.

Give this a listen while you look at the leaves — Van Morrison's "Autumn Song".

This is the first leaf I found in my neighborhood; it was a maple bigger than my hand, and it seemed to contain the entire history of its journey from green to red and gold.

The basswoods, most of which contain miniatures of themselves within themselves, are a favorite. 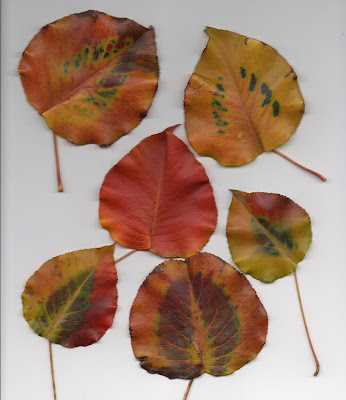 This is a fiery tree that I came across while I was driving on Long Island. I pulled over to the curb so I could take this picture of it. 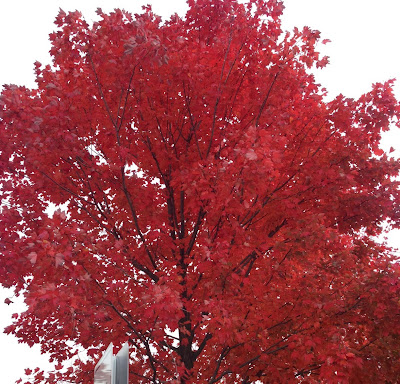 But enough of my neighborhood. Diane Baranello, a life coach and fellow member of the board of New York Women in Communications, sent magnificent scans of leaves and flowers she's pressed. 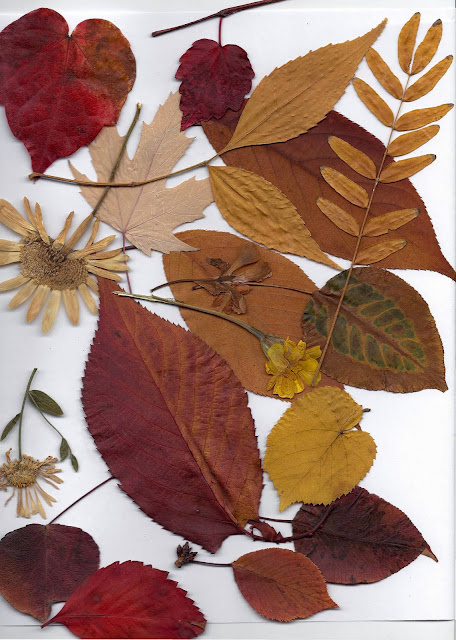 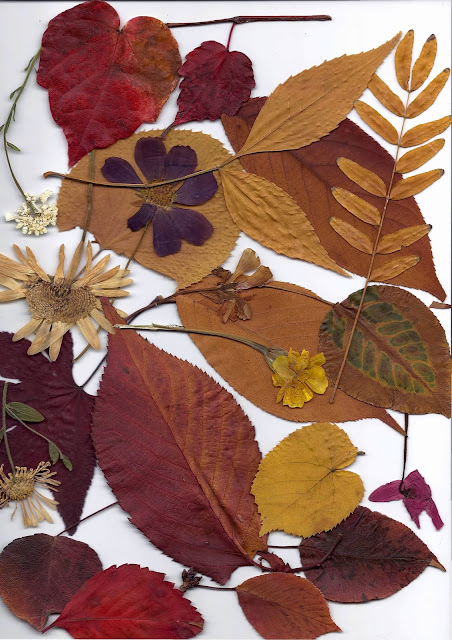 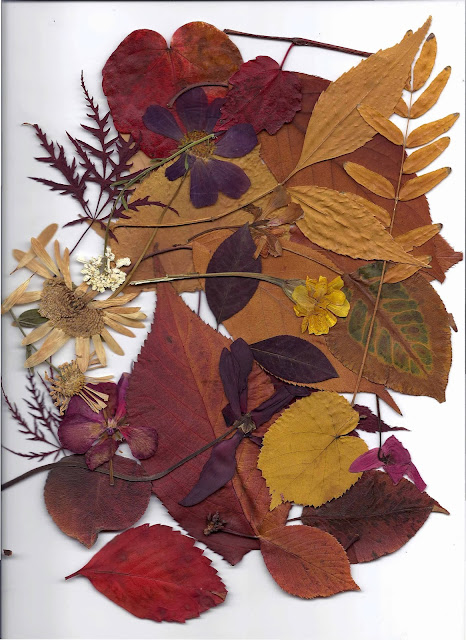 Pam Carlson, who describes herself as a "cheerful secular humanist with a cynical misanthropic streak," sent three lovely scans gathered near her home in Marin County. Plums, starfish-like sweetgum (?), ginko and two other yellows that I don't recognize. Update: Pam says the large one is a fig and the smallest is an oak. 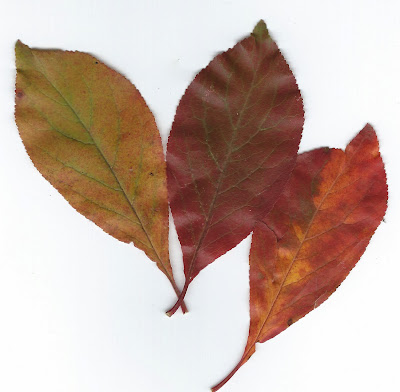 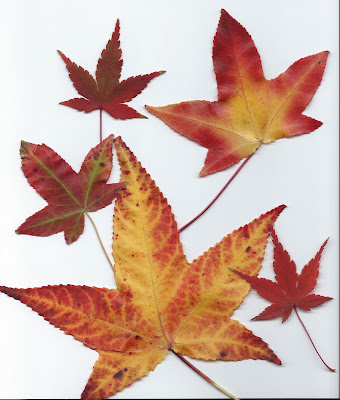 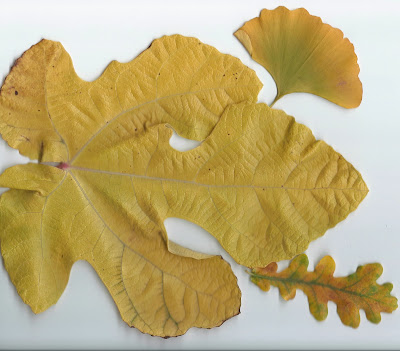 My old friend Briggs Meyer — we met decades ago when we were students at the School of Visual Arts — sent autumn ginkos and maples from San Francisco. 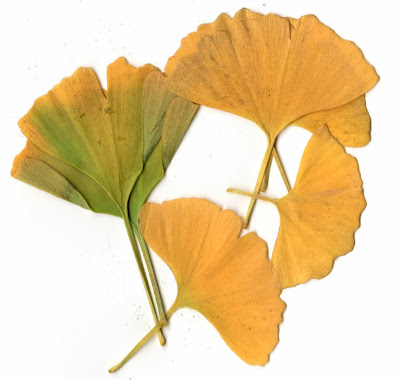 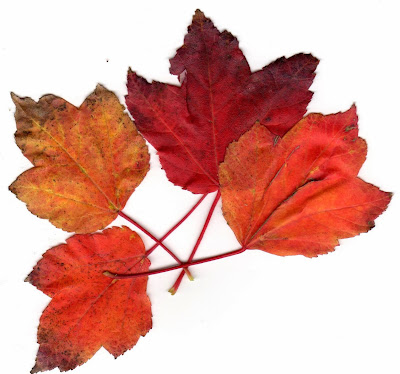 "The autumn leaves blew over the moonlit pavement in such a way as to make the girl who was moving there seem fixed to a sliding walk, letting the motion of the wind and leaves carry her forward..."
~ Ray Bradbury, Fahrenheit 451

Author and professor Dr. Harrison Solow sent photographs of vast piles of extravagantly multicolored leaves from her travels in Northern California, Wyoming and Idaho. Do click on them so you can see them larger. 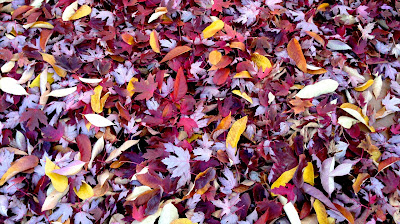 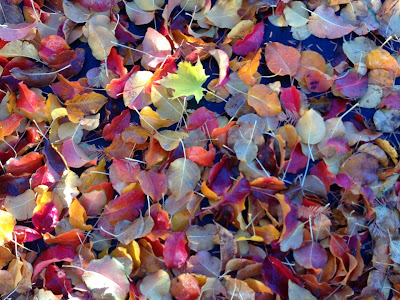 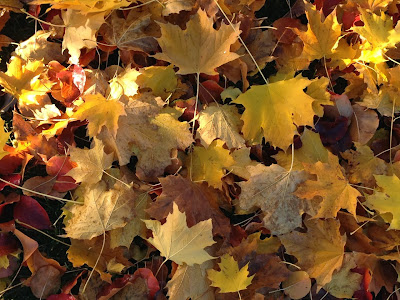 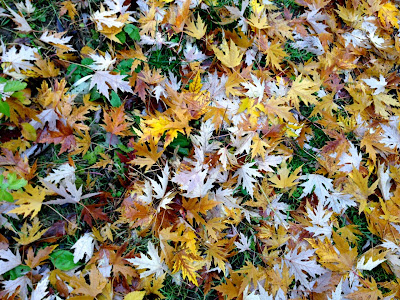 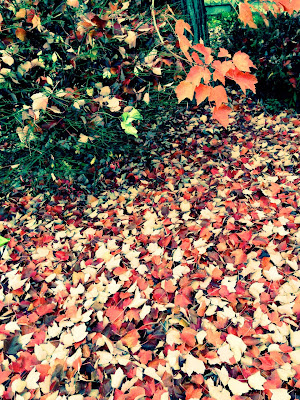 "The tints of autumn...a mighty flower garden blossoming under the spell of the enchanter, frost."
~ John Greenleaf Whittier