"Eccentricity has always abounded when and where strength of character had abounded; and the amount of eccentricity in a society has generally been proportional to the amount of genius, mental vigor, and courage which it contained. That so few now dare to be eccentric, marks the chief danger of the time."
~ John Stuart Mill

"The Unleashed Mind," the cover story of the May-June 2011 issue of Scientific American Mind, is an article about highly creative people. I've been thinking about it off and on for almost a year now.

The article includes several stories about the eccentricities of extravagantly creative types. My favorites are about Charles Dickens, who "is said to have fended off imaginary urchins with his umbrella as he walked the streets of London." Dickens also apparently believed his characters sometimes followed him down the street. Perhaps that explains "Dickens' Dream," the positively ensorcelled creation of Victorian illustrator Robert William Buss. 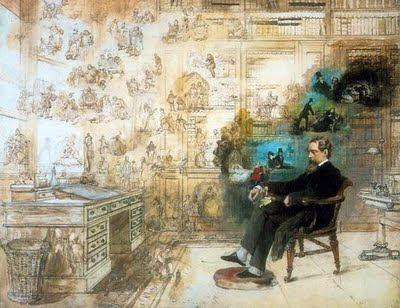 But back to the known world. Scientific American Mind is in the helpful habit of summing up its articles in snappy bullet points — in this case:
Some scientists believe the key to creativity is "cognitive disinhibition" — basically, having fewer filters to block out disorderly thoughts.

But that's not what made me want to write this post. The impetus was a sidebar containing an eleven-question test titled "Are You a Creative Eccentric." For now let's just focus on question 11: "Do you often feel like a square peg in a round hole." The magazine says, "A yes answer to question 11 is related to both creative thinking and schizotypal personality."

That surprised me. Not the schizotypal personality bit — you can have that without schizophrenia. The surprise was that while I don't consider myself an exceptionally creative person, my whole life consists of holes into which I do not fit. I remember feeling wrong-shaped as early as three or four years old. In fact, I don't ever recall feeling completely right-shaped, even in my own family. When you were a child, did you ever believe you were adopted — or perhaps wish you were? Then you know what I mean.

To me the peg-and-hole question is really about feeling at home. I most often feel at home when I'm in the zone — when I'm writing or editing and the words are flowing effortlessly and the structure comes together as if preordained. Going for long walks, having meals with one or two close friends — those things also feel like home.

Those feelings are also common among introverts, as an excellent NPR story recently pointed out. (See link below.) But the creative world contains as least as many extroverts as introverts...so there must be much more to it. 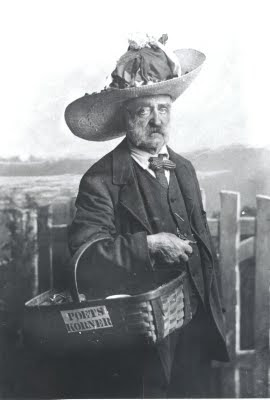 This is Elisha Pope Fearing Gardner. I don't know anything about him — but perhaps this photo tells us all we need to know. He looks like a fellow who fit in everywhere and nowhere.

As I write this, it is late in the afternoon of February 11, 2012, the 105th anniversary of my mother's birth. Her name was Gertrude Elizabeth McMeel Hush. She died 26 years ago, but we lost her well before that to the personality-eradication of Alzheimer's.

This morning, as is our custom, my sister Terry and I got on the phone and sang "Happy Birthday" to mom together before rushing off to the obligations of the day. Now, as the day ends, I'm reminiscing. One of the things you discover after you lose someone to dementia is, eventually you forget most of the awful parts. You get your good memories back. 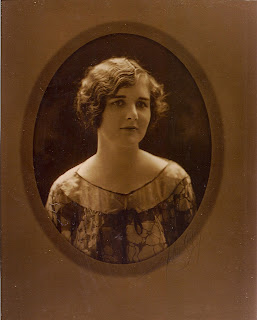 This photo of my mom hangs on my living room wall. She must have been quite young when it was taken, a teenager. By her twenties, the softness of her features was replaced by delicately sculpted bone structure. Those finger waves make me think it was the early to mid-1920s. But she never lost that faraway look.

When I think of mom, I think of music. It was a huge part of her life and became part of mine. She loved classical music — symphonies and concertos — and I came to love them, too. She also liked romantic songs. "Autumn Leaves" was one of her favorites; she never heard Diana Krall sing it, but I'm sure she would have liked it.

Mom and I never saw eye to eye about my beloved blues and rock 'n' roll, but I have fond memories of sitting with her, both of us giggling, listening this next song. It's Harry Nilsson's version of "It Had to Be You," and if you listen all the way through, you'll hear a new twist on the lyrics. Mom, this one's for you. (Note: The video below directs you to click through to YouTube. Trust me — it's worth it.)