“Every time I see an adult on a bicycle, I no longer despair for the future of the human race.”
~ H. G. Wells

As a child, Divinipotent Daily spent countless, blissful hours tooling around on a Raleigh English racer; it was maroon, a color that seemed indescribably grown up and sophisticated. She currently rides a lovingly reconditioned pre-owned specimen from the fine people of Recycle a Bicycle. Divinipotent Daily is a bicycling fan.

"The bicycle is the most civilized conveyance known to man. Other forms of transport grow daily more nightmarish.  Only the bicycle remains pure in heart."
~ Iris Murdoch

Iris Murdoch's observation is true. Bicycles really are civilized conveyances; they are also good for the environment, inexpensive to own and operate, good exercise and fun. But riding a bike on city streets is another matter. Statistics collected by the NYC Department of Transportation show that the number of bicycle riders in New York City rose 35% between 2007 and 2008. While bike riding in U.S. cities does not yet approach the two-wheeled traffic in other parts of the world, given worries about the environment and rising fuel costs, similar or greater increases across the U.S. would not be surprising.

But bicycles in big cities are surrounded by cars driven by people driven mad by traffic. If there are bike lanes, a bicyclist is likely to find cars there, sometimes parked there. Other common road hazards include cars making right turns without looking or signaling and cars arrogantly sideswiping bicyclists and running them into the gutter. Cars also swing their doors open unexpectedly, forcing riders to choose between slamming into the protruding door or swerving into traffic.

The other day the wonderful BoingBoing.net, a compendium of the most interesting and peculiar things on the Internet, posted an item about a Bicycle Defense Kit that fits in an Altoids box. Clearly created by an enraged bike rider, it includes "citizen citations," stickers saying "I was a jerk to a cyclist" and a variety of guerrilla warfare weapons including stink bombs and valve stem cutters. Perhaps it's not the wisest approach, but it is understandable as an expression of frustration.

"The bicycle is a curious vehicle. Its passenger is its engine."
~ John Howard

The bicycle's passenger-engine is of course what William Burroughs called "the soft machine" — a living, breathing human. And bike-riding humans are also part of the problem in urban areas. New York City may be a special case, but most local bike riders don't follow any discernible rules. In fact, most seem unaware that rules for bike riding even exist, and that makes them dangerous. It's not unusual to see bikes riding three and four abreast. Nobody uses hand signals. Nobody waits for lights or stops at stop signs. Riders drive the wrong way on one-way streets, loop slowly from side to side when surrounded by traffic, slide in between cars on congested streets and speed through occupied crosswalks, sometimes colliding with pedestrians.

“Get a bicycle. You will not regret it. If you live.”
~ Mark Twain

The fact that most New Yorkers have never laid eyes on the city's "Bicycle Rules and Regulations" pamphlet, which is not available in bike stores and is impossible to find on the city's otherwise helpful Bicycle Information site, certainly isn't helping. The site does trumpet the construction of 200 miles of new bike lanes, offers a whole page on bike safety, notes the installation of new, temporary "art" bike racks designed by biking enthusiast David Byrne and even provides a map of where to see them.

“The bicycle, the bicycle surely, should always be the vehicle of novelists and poets.”
~ Christopher Morley

Divinipotent Daily is one of the few people to actually possess a copy of "Bicycle Rules and Regulations." (If you would like one of your own, send an email to Ageblind@gmail.com.) Only four pages long, it is one of the least intuitive, most visually off-putting, least user-friendly publications a person is likely to come across. A jumble of randomly organized information, it offers not one visual clue as to what is important. In Divinipotent Daily's dreams, some caring bicycle manufacturer will hire a writer-designer team — or David Byrne! — to rethink and redesign the wretched document and then distribute copies to every bicycle shop in the metropolitan area.

"Nothing compares to the simple pleasure of a bike ride."
~ John F. Kennedy 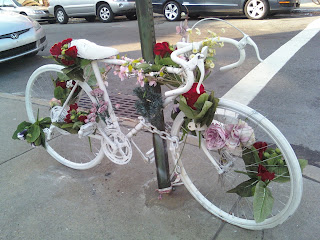 This is a photo of a Ghost Bike, a permanent memorial to someone who died while bicycling. This particular bike is in Greenpoint, Brooklyn, but similar bikes can be found all over the city. According to New York magazine, they're turning up in other cities as well. Let's hope that with a little bit of education, drivers and bike riders will share the roads with mutual respect, and Ghost Bikes will become a thing of the past.