Divinipotent About Monkey See, Monkey Do 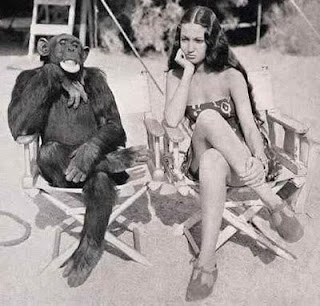 "Let us carefully observe those good qualities wherein our enemies excel us; and endeavor to excel them, by avoiding what is faulty, and imitating what is excellent in them."
~ Plutarch

PsyBlog is a Web site and newsletter written by Jeremy Dean, a psychology researcher at University College in London. Earlier this week, PsyBlog's topic was research into "the chameleon effect" — specifically, the theory that we like someone better if they mimic our body language.

Scientists are not talking about the exaggerated mimicry of a nine-year-old aggravating his his twelve-year-old sister by copying her every word and gesture. This is about subtler actions — things like concurrent foot waggling, face touching and smiling. Although mimicry is generally unconscious, researchers have tested the chameleon effect by observing what happens when they send people into a room to intentionally mimic strangers in understated ways. The answer seems to be yes, mimicry does increase liking.

PsyBlog deals with psychology, but when neuroscientists like V.S. Ramachandran talk about mimicry, they talk about mirror neurons. Mirror neurons are fascinating brain cells that, in monkeys, seem to connect vision to a sort of empathy. Basically, scientists have found that whether a monkey is scratching its chin or watching another monkey scratch, its mirror neurons light up. The implication: in monkey society, your itch is my itch.

As yet no testing has been done on people, but that hasn't stopped speculation that humans also have mirror neurons that influence everything from cultural habits to theory of mind to empathy. (If human mirror neurons are eventually discovered, perhaps we will finally have an explanation for teenage fashion trends.)

Whether it's mimicry, mirror neurons, peer pressure or some still unknown factor, it's obvious that identifying with others is essential to social understanding and human bonding. Isn't it ironic that we humans, having built a culture based on imitation and homogeneity, claim to worship originality?

“Most people are other people. Their thoughts are someone else's opinions, their lives a mimicry, their passions a quotation.”
~ Oscar Wilde
Email ThisBlogThis!Share to TwitterShare to FacebookShare to Pinterest