Divinipotent About That Creepy Feeling

“It turns out that an eerie type of chaos can lurk just behind a facade of order — and yet, deep inside the chaos lurks an even eerier type of order.”
~ Douglas Hostadter

The current issue of the excellent science publication Seed Magazine includes an article about the "uncanny valley" — that eerie mental landscape in which we find ourselves when we see robots, animations and other facsimiles that look just a little too human (think Polar Express). As the article explains, scientists have been trying to understand that creepy feeling ever since Ernst Jentsch wrote about it in his 1906 essay, "On the Psychology of the Uncanny." (Sigmund Freud expounded on the subject in 1918, and Seed's account of his subconsciously revealing interpretations is highly entertaining.)

Also entertaining: this YouTube video on the uncanny valley from Popular Science.

Although the uncanny valley feeling is familiar to most of us, the term itself has mainly been used by robotics experts. It was coined by one of their number — Japanese roboticist Masahiro Mori — in 1970, when he realized that a robot that looks too human provokes a strong, negative emotional response. Recent research has found that monkeys, too, have the uncanny valley reaction.

The wonderful uncanny valley chart below, which adds stuffed animals, Disney movies and Ann Coulter to the mix, can be found on the blog of CGI artist Jonathan Joly. 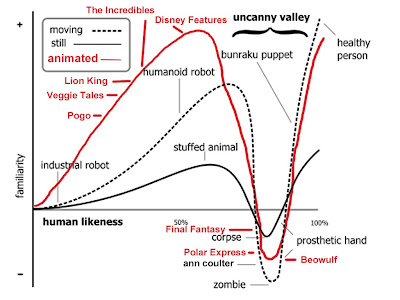 "I believe that robots should only have faces if they truly need them."
~ Donald Norman

Scientists don't know why we react so negatively to not-quite-human (or not-quite-monkey) objects. Some say it's because they look like zombies — dead but still moving, which obviously isn't right. (Note to self: expect a call from the Zombie Anti-Defamation League.) Some say almost-human objects appear sickly, and the uncanny valley is a protective instinct telling us "run for it — disease is present." Scientists at Princeton Neuroscience Institute, which conducted the monkey study, believe the phenomenon is a biologically based evolutionary adaptation but are not willing to place any bets on its purpose.

One of Divinipotent Daily's close friends is an uncanny valley savant. Her response is triggered by a broad range of "just not right" things including statues and people in Mickey Mouse costumes. To my friend's list I would add ventriloquist's dummies, although it could be the ventriloquists themselves who are giving me the creeps.

But why stop there? Have you ever been in an extremely familiar place — on a walk through your own neighborhood, maybe — and suddenly sensed that something just wasn't right? Isn't that an uncanny valley? And how about actual humans who give you the creeps (like ventriloquists)? They may not look dead, but something is certainly off. National Geographic has an online article and slide show about Tanzania's Hadza tribe, who continue to live as hunter-gatherers as they have done for perhaps 10,000 years. As they walk among snakes and scorpions and leopards, I'm betting their uncanny valley sense is working overtime.

Divinipotent Daily has a new fascination. Expect an uncanny number of updates.

“Is it weird in here, or is it just me?”
~ Stephen Wright
Email ThisBlogThis!Share to TwitterShare to FacebookShare to Pinterest