"I have not done what I wanted to, but I tried to make a good fight."
~ Mary Cassatt 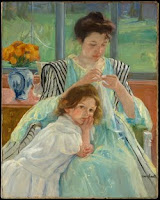 I recall the day when, as a young teenager, I stopped to look at a painting by Mary Cassatt at the Metropolitan Museum of Art in New York and realized I was looking at a painting by a woman. My parents had quite a few art books, but none contained anything like this.

In school, we had been taught about the women writers of the 1800s who took male-sounding pseudonyms to be taken seriously (Charlotte and Emily Brontë writing as Currer Bell and Ellis Bell, respectively, and Mary Ann Evans as George Eliot). But women painters, like women composers, simply never came up.

"I have had to go to men as sources in my painting because the past has left us so small an inheritance of woman's painting that had widened life.... Before I put a brush to canvas I question, 'Is this mine? Is it all intrinsically of myself? Is it influenced by some idea or some photograph of an idea which I have acquired from some man?'"
~ Georgia O'Keeffe 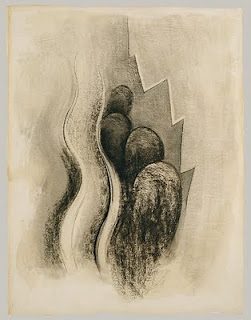 The Whitney Museum in New York is currently devoting one of its floors to another great woman artist, Georgia O'Keeffe. The show focuses not on the giant, intense flowers, animal bones and Southwestern landscapes most people associate with O'Keeffe, but on the abstractions she created in the very beginning and at the end of her career.

O'Keeffe has long been an icon and role model for women who, like me, grew up in the 1960s and '70s and once entertained ideas about living the artist's life. To enter the art world in those days was to walk among chest-beating cavemen. For a woman to be as uncompromisingly herself as Georgia O'Keeffe in that testosterone bath of an environment — 50 years earlier — must have required enormous courage. Not surprisingly, during much of her lifetime, O'Keeffe was dismissed by critics as a lesser artist, someone off the mainstream in a little tributary called female sensuality.

In the mid-1970s feminist and artist Judy Chicago created a controversial, three-dimensional work called "The Dinner Party," which is now a long-term installation at the Brooklyn Museum in New York. "The Dinner Party" was created from materials traditionally associated with women — porcelain, ceramics and embroidered linens. It is controversial because of its intellectual intent and because most of the plates created for "The Dinner Party" depict symbolic, flower-like, three-dimensional vulvas. The point of the piece is to pay tribute to women's contributions throughout history and, in the artist's words, "end the ongoing cycle of omission in which women were written out of the historical record." 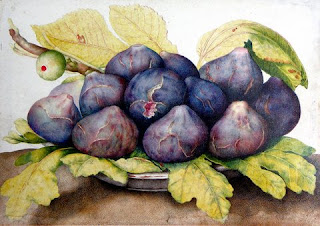 Women have always created art. This beautiful plate of figs was painted by Giovanna Garzoni, a woman artist who lived in the 1600s. And have a look at this magnificent still life. 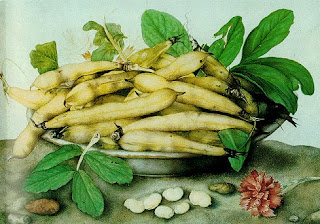 It's another Garzoni. She was not the first; the historical record now includes women artists starting in Medieval times, but we can assume they have been there all along. We just haven't heard about them because for centuries, the people writing the art history books chose to ignore them. Now, with the help of the Internet, things are finally changing. It is no longer possible to hide women's contributions when more are added daily to the sum of beautiful things to see and explore.

"I said to myself, I have things in my head that are not like what anyone has taught me — shapes and ideas so near to me — so natural to my way of being and thinking that it hasn't occurred to me to put them down. I decided to start anew, to strip away what I had been taught."
~ Georgia O'Keeffe
Email ThisBlogThis!Share to TwitterShare to FacebookShare to Pinterest