Divinipotent About the Blame Game

“It's not whether you win or lose, it's how you place the blame.”
~ attributed to Oscar Wilde 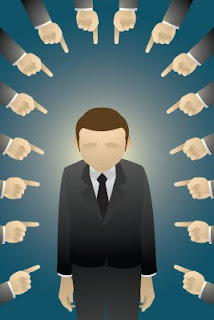 Many years ago I worked for a woman who had a wonderful approach to mistakes. Whenever things went kablooey (a lot) she would say, "I don't care who did it or how it happened. How can we make sure it never happens again?"

A new research study by Stamford University and the USC Marshall School of Business reminded me how wise that attitude was. It's no surprise that when one of us points a finger of blame, lots of others are quick to join in. But according to the study, the more public the blaming, the more likely it is to catch on. As Science Daily put it, "Merely observing someone publicly blame an individual in an organization for a problem — even when the target is innocent — greatly increases the odds that the practice of blaming others will spread with the tenacity of the H1N1 flu." And the more blame spreads, the more the workplace cultivates a "culture of fear."

The current word for this "blamestorming," but the phenomenon itself is nothing new. It's how blamers from Adolph Hitler to Glenn Beck to mean girls in junior high schools have always controlled their minions.

This Stamford-USC study is behavioral, concerned with how people behave but not why. In my unscentific experience, fear may motivate young children to place blame, but teen and adult blamers are likely to be manipulators trying to gain an advantage. Still to be resolved is the question of what twisted pack instinct leads so many people to second the blame and pile on.  Ben Dattner, an organizational psychologist, consultant and adjunct professor at NYU, writes an interactive blog series called "Credit and Blame at Work" for Psychology Today. Perhaps he'll get to it one of these days. Meanwhile, I think I'll borrow a page from my old boss and look for the answer to a different question: How can we stop the blame game in its tracks and make sure it doesn't happen again?


“We believe that to err is human. To blame it on someone else is politics.”
~ Hubert H. Humphrey
Email ThisBlogThis!Share to TwitterShare to FacebookShare to Pinterest